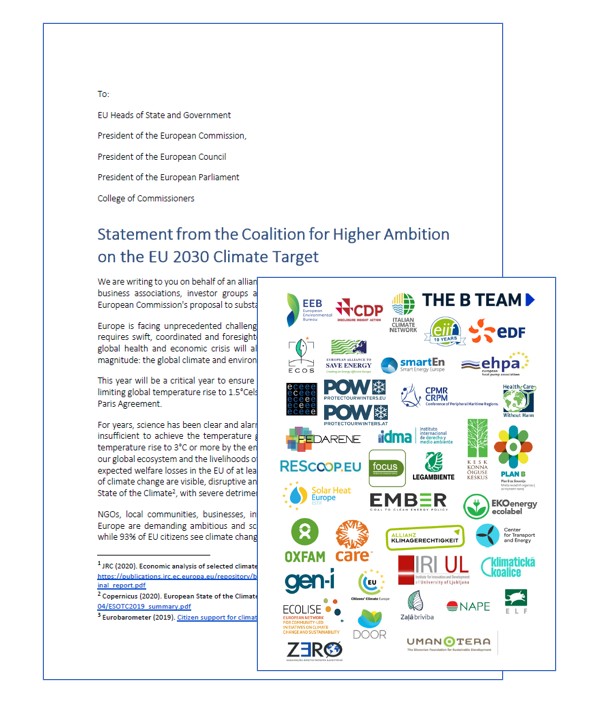 EiiF has joined an open letter by the Coalition for Higher Ambition to EU Heads of State and Governments in support of the European Commission's proposal to substantially increase the EU's 2030 emissions reduction target.

The 47 organisations representing over 2.700 cities, 330 regions, €62 trillion in investment portfolio, more than 800 companies and 330 NGOs state:

"We, as members of the Coalition for Higher Ambition, urge you in your deliberations on the EU’s 2030 climate target to support the highest level of ambition possible. This should be at least -55%, while some members of the Coalition, similar to some members of the European Parliament, are calling for an emission reduction of -65%. This should be achieved by strong emission reductions and supported by additional decisive action to remove emissions through Nature Based Solutions in line with the need to protect Europe's biodiversity."

Andreas Gürtler, Director of European Industrial Insulation Foundation (EiiF) said: “EiiF supports the 2030 reduction target of at least 55% in order to reach net zero in 2050. These goals can only be achieved with the support and participation of all key sectors including the EU’s industry and energy supply. Improving insulation standards in industry can make a big contribution and also offers added value to the European economy.”

Please read the full Statement from the Coalition for Higher Ambition on the EU 2030 Climate Target.