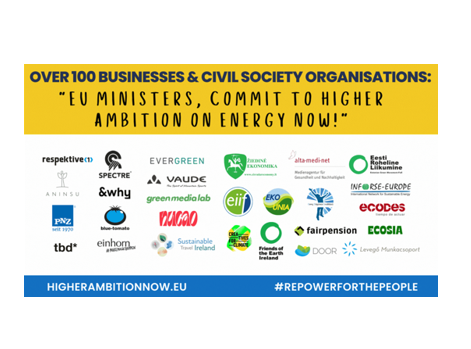 EiiF is proud to have signed, together with over 100 businesses and NGOs, onto a joint statement asking for EU Energy Ministers to commit to 50% renewable energy and 20% energy efficiency targets for 2030. The letter has been sent to all 27 EU Energy Ministers.

Right now, European energy ministers have a critical chance to not only help solve the immediate energy crisis, but to put us on track to tackle climate change.

We need higher targets because:

Reducing our use of fossil fuels is necessary to solve three critical problems at once: cutting energy bills, securing our energy supply, and acting on climate change.

We have missed many opportunities to pivot away from the fuels driving catastrophic climate change, and we cannot afford to delay this transition any longer. As energy bills spiral out of control across Europe, both businesses and consumers alike face hard choices.

87% of Europeans think “the EU should invest massively in renewable energies such as solar and wind”. Rather than returning to business as usual and sinking more public money into fossil fuels, we should listen to our own citizens and focus on a renewable path out of the energy crisis. Higher targets for renewables and energy efficiency are not only an economic and climate imperative, but also hugely popular.

Ambitious targets create certainty for business, good green jobs for workers, and affordable energy for everyone.

Setting binding 2030 targets of 50% sustainable renewables in the energy mix and a 20% increase in energy efficiency will accelerate the transition away from expensive and unsustainable fossil fuels, greatly reduce energy prices and volatility, and create European jobs.